We met on Match.com
Neither of us had ever used an online dating service, but each of us posted our Profile on Match.com at the same time in October 1997. I was not wanting to spend another cold winter all alone in Berrien Springs, Michigan; and he was looking for someone to share his life in Columbus, Ohio.

"The geese are ready for winter and I am not," I wrote.

"I'm willing to come and sit a spell by your fire," he responded.

55 days later "The Highlander Hawk" married his "99 Percent Angel" in a sunrise wedding on the shores on Lake Michigan in Bridgeman, Michigan. We hadn't planned it that way, but once I was sure he was the light of my life, I wasn't satisfied to reach out and touch via the Internet cyberwaves another day!

Soon we realized that we had more than the number 55 in common! Between the two of us, we were able to unravel the mystery of a strange dream he had a few months before we met. It was the universe foretelling the merging of each other and our children!

In my book, "Dusty Angels and Old Diaries", chapter 55 (by the way) describes the dream and how we realized its meaning after we were married. He told me about the strange numbers as we drove to Ohio after our wedding.

A few weeks before we met on the Internet, he had fallen asleep while waiting for the evening news. Suddenly it was like someone had touched him on the shoulder. He noticed the time was 11:55. He had missed the news, so he went to bed. Later he woke up again with a feeling like a touch on his shoulder. It was 12:55. Then later again, with a feeling of urgency he woke up again and again. 1:55, 2:55, 3:55 and then 5:55. During the next few days, he was flooded with the number 55 in his accounting work.

Several nights later he woke up several times with the same urgent feeling. As he sometimes does when numbers seem meaningful, he started writing down the times he woke up not having a clue what it meant! 1:07, 2:19, 3:20 and 5:04. He placed the piece of paper in his billfold.

Later, on our honeymoon when I told him we had gotten married 55 days after we started writing, he let out a gasp and told me about the strange dreams. Then he pulled out the paper and showed me the numbers that still did not make any sense at all.

In the same way, we have been mystified with the continuing repetition of the number 55 in our life. Without knowing it, every house we've lived in has the number 55 someplace in the address or zip code. So far, that is eight places!

When I wrote my book, it ended up with 55 chapters (without me planning it) when I was 55 years old.

There's more than we can ever write down! We still ask ourselves why the number 55 seems to impose itself on us so often and with such meaning! Mostly, we let it remind us that no matter what happens, we have our love and it's a reminder to say, "I love you".

Sometimes I'll wake up and turn over to look at the clock hoping I can sleep for a few more minutes. Often it's 5:55. Sometimes that happens several days in a row! It reminds me to treat Jim a little extra special that day!

Just yesterday, as I signed in to have some x-rays done, I noticed that the ID of my doctor has 555 in it. The family I work for has 55 in their phone number. The phone number of the college I plan to attend has 55 in the phone number. (Not the prefix number!) And, wouldn't you know, the Federal Student Aid ID number assigned to me has the number 55 in it!

The house we live in is 5514 and there are at least six cars in the parking lot each day with 55 in the license number. The office address has 55 in it. The prefixes of phone numbers in our town have 55 in them. The address where Jim works now has 55 AS the address. His job before that had 55 in his desk phone number (not the prefix). That's close enough for me!

My nursing licenses (both my original and current: Ohio and Florida) have 55 in the four different ID numbers spanning 38 years.

By the way, many of our friends and relatives have 55 someplace in their address or phone number too! Right now I can think of several: Bobby, Neil, Barb, Johnnie...

This is the beginning of our story. In the next few days, I'll post the other 55's as I think of them.

Stay with us and become part of our 'magical' family!

Take Care on the Journey,
~Linda

Magic Magic everywheres,
55 is in the air,
so remember to take care
and may your 55 always there.

In the last couple of days my microwave oven has been making noises as if somebody is punching its keys. Every time I go and check it, I've found that it continuously sets time to 55:55. Funny. I googled the time and found your blog. I don't know...maybe things happen for a reason. And I think the reason behind this is that there is joy to come. Joy is what I felt after reading your blog. Thanks.

Dear Anonymous,
I wish I knew who you were, but am very happy to hear your story. Thanks for posting it. Hopefully, you found my 'regular' blog at 'Lindas Notebook'.

Take Care on the Journey,
~Linda 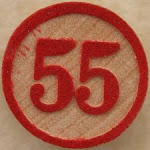 Linda J. Meikle (Former Linda Cash)
Published author, Dusty Angels and Old Diaries. Walt Disney said, “It’s kind of fun to do the impossible.” I’ve done what many have said would be impossible, but only because I believed it was possible! Along the way, two sons blessed my life, and two husbands changed my life. Nursing brought fulfillment. Writing filled an emptiness. Photography added beauty. The piano instilled peace. Poetry found creativity and relativity. My family brings completeness. My hubby believes in me and the universe. The universe says it all.